I bought 20 LM741 off Ebay in summer of 2019 from the seller "satisfyelectronics" and it turns out that only 3 functioned as a LM741. After questioning my sanity for an entire afternoon, I eventually set up a dead simple unity gain circuit and tested every IC I had and only 3 functioned as expected.

All the non-functional ICs have relatively decent laser etching and it is indistinguishable from the chips that do work. 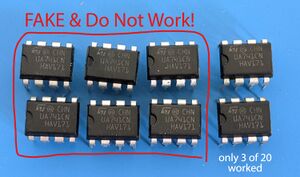 Fake LM741 that do not work

After playing with a TL072CP op-amps which I thought had the same pinout as the LM741, I noticed that the TL072 exhibited the same behavior of these fakes and made me wonder if these fake chips are actually dual op-amps where Vcc is on pin 8 rather than pin 7. I re-tested the nonfunctioning LM741s with the pinouts of a TL072 dual op-amp in a unity gain configuration and both outputs had the expected output.

I think that someone took some other used dual op-amps and repackaged them as a LM741. Nevertheless, I have no doubt that all 20 of these are fake chips since they all have identical laser etching but totally different behavior.