The Lenovo SE-341AC smart plug (model number ZA7F0000WW) is a smart plug based on the ESP8285N08 / TYWE2S module. This model supposedly has power measurement from its reviews even though it isn't advertised on the product page. After playing with it using the Tuya app, it indeed does have power measurement capabilities.

It is similar to the other Tuya based smart plugs. While the user manual says that it works with the Lenovo Link Pro app, it should also work with the Tuya Smart Life app.

I bought a pair of these smart plugs for $8 CAD each.

This plug is based on the TYWE2S module.

The pinouts for the module in this plug are listed below.

The PCB looks well designed with thick traces to handle the 16A load. There are some additional pictures of the underside on the reddit post linked below.

This plug is not compatible with tuya-convert since the preloaded firmware is too new. The only way to load Tasmota is via serial (see also Gosund WP5).

The smart plug's cover is held on by 8 plastic clips. There are 3 on each of the round ends which is hard to unclip. The best way to open these without damaging the plastic casing too badly is to use a flathead screwdriver. At the rear of the plug, jam a flathead screwdriver starting at the center top and center bottom of the casing. Wiggle it to one of the sides until you see a hole on the lip of the back cover. Use a blade or spudger to pry the back cover up using this hole (take care not to put too much force on the cover as it can deform it). With the cover partially lifted, try to unclip the end clip with another spudger (if you can, it's very tight) or by using brute force (lift the cover as hard and far as you can until it snaps out of the clip). Repeat this again on the other side.

After opening the plug, you should see the wireless chip pictured below. To flash Tasmota, you need to connect to 5 pins: the RX/TX pins, 3v3, ground, and GPIO0.

See the pictures below for an idea of how I connected the pins:

The pinouts for all 5 connections are: 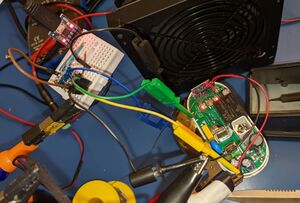 Use esptool to read the firmware. Run the following command to extract the firmware from the ESP chip.

After obtaining the firmware, you can extract the stock PSK key by running strings on the binary. This information might be useful for the tuya-convert community to help them potentially finding out how the PSK keys are generated.

Download the most recent version of Tasmota from http://ota.tasmota.com/tasmota/release/. You will want to get the tasmota.bin file.

Using esptool, erase and then flash the firmware. I was unable to erase the flash for some reason, Make sure you are using the latest version of esptool.

After flashing, disconnect GPIO0 and power cycle the device. It should boot and the blue LEDs should be lit. You should see the plug appear as an access point. Connect to it with your phone and configure the WiFi details on the captive portal page.

Once Tasmota is running and you're able to reach the web page on your network, desolder all the connection wires and re-assemble the plug. If your outter case is slightly mangled from the disassembly process, some hot air can be used to remold the plastic casing.

The Tasmota template for this device is available at https://templates.blakadder.com/avatar_AWP04L.html. At the time of this writing, the pinouts do not have the appropriate configuration for the power monitoring feature that's available in this device and the red LED.

Through some trial and error, I was able to come up with the following template that also gets power measurement readings.

The pinouts for this plug are:

Since Tasmota doesn't support multiple LEDs per relay (as far as I can tell), you can either keep the blue light on all the time (by setting its LED number to 3) so that it appears magenta when on and blue when off.

Connect a kill-a-watt or other power meter and attach a load to the plug. Use the voltageset and currentset commands to calibrate its power measurements.

This should correct the power factor being reported down to ~0.9.

The calibration values that I ended up with for both my smart plugs were:

These smart plugs have good voltage readings even under load, unlike my older AWP04L units which reads ~10 volts under at 6 amp load.